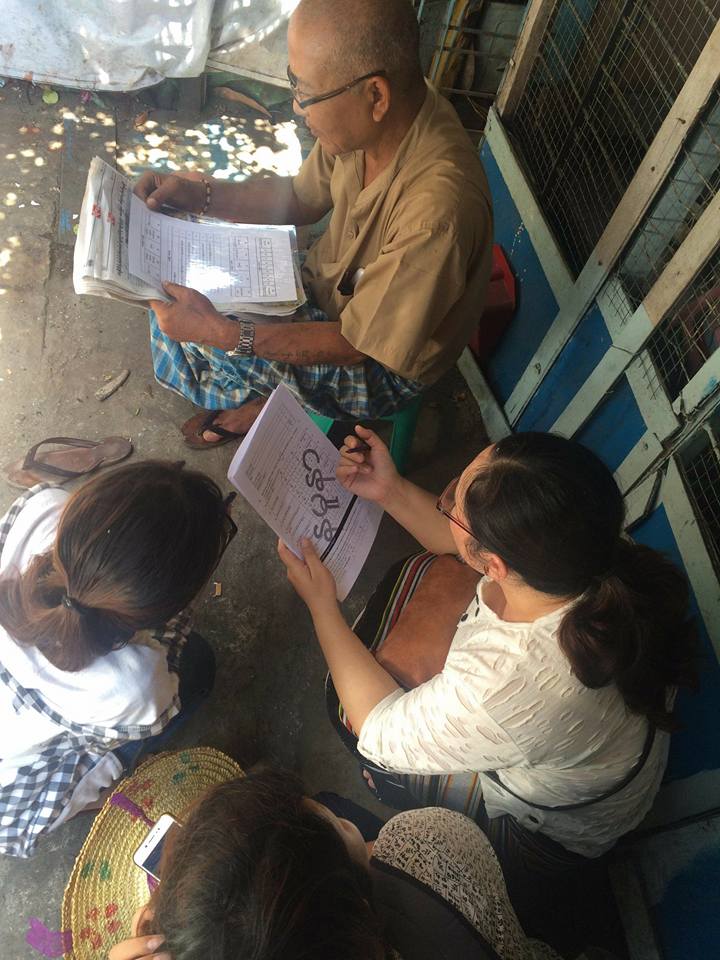 The 2016 post-electoral survey was the second nationwide survey conducted by PACE. To carry out the survey, PACE recruited and trained 167 volunteers to carry out the survey by randomly selecting households, conducting interviews and returning questionnaires to PACE. Six two-day enumerator trainings were conducted in Yangon and Mandalay and included interview role-plays and practical exercises in household and respondent selection.

Additionally, 17 state/region coordinators were assigned to oversee the work of enumerators. Finally, 15 volunteers were trained to conduct data entry for the survey findings.

The Goal of Survey

PACE conducted the post-election survey to identify priorities for electoral reform and to identify knowledge gaps in civic education by probing:

In Myanmar’s November 2015 elections, 69 percent of people turned out to vote according to the Union Election Commission (UEC). More than 10,000 people mobilized to observe election-day and dozens of organizations conducted voter education during the electoral process -- a sign that citizens were finding new ways to be involved compared with past elections. Although the public generally accepted the results of the election, there remain a number of challenges in the country’s political transition, including debates around the constitution, negotiations around the peace process, and the democratic culture of the country.

Attitudes and Opinions about Democracy and Elections

The level of interpersonal trust is often measured in public opinion surveys to demonstrate quality of social, economic and political relations between people in a society. PACE asked respondents if they thought “most people can be trusted OR that you need to be very careful in dealing with people?”. The majority of respondents (55%) believe that you must be careful with people, while only 37% believe that most people can be trusted and 8% said they did not know.

Opinions on the Status of Human Rights

Perceptions about the role of citizens

Overall, interest in politics has increased since PACE asked the same question one year before in 2015. PACE notes, however, that interest in politics has decreased slightly since the immediate post election period. Immediately after the election, the International Foundation for Electoral Systems (IFES) conducted a survey from December 2015-January 2016 that reported that a total of 72% of Myanmar citizens reporting to be very or somewhat interested in politics compared with 58% in PACE’s survey conducted four months later.

PACE wanted to measure how active and interested citizens were in political and civic activities in their community. They asked respondents if they had attended a community gathering, attended a voter/civic education meeting or signed a petition in the past year.

Overall, respondents indicated that they were not very active in these activities over the past year, especially in voter/civic education and signing petitions.  More than half of respondents had not participated, however the majority said they would if they had the opportunity. In general, citizens show more willingness and interest in the traditional and more common activity of community gathering compared to newer activities like voter education or signing a petition. More than half of citizens said they had never joined a voter or civic education meeting, despite the fact that elections were held last year.

Women were less likely than men to participate in community gatherings, potentially showing the need for greater promotion of their participation.

Respondents who said they are interested in politics were more likely to attend a voter education meeting.

Participation in the 2015 Elections

According to the Union Election Commission, 69% of voters cast a ballot in the election. PACE asked respondents why they did or did not vote.

Among respondents who said they voted, PACE asked “What was the main reason you voted in this election?” Most voters saw the election as a means to express their political view: either to support a party or candidate that they like (25%), express their opinion (16%), or choose their representative (5%). Others saw voting as an important role of citizens: 22% said they voted because it is a civic duty, while another 15% said it is important to vote. There was no notable difference in the motivation of voters between ethnic states and regions or between men and women.

Notably, women were much more likely to say they did not vote because they were busy or sick on election day.

Among respondents who did not vote, twenty-two percent (22%) of youth respondents said they did not vote because their registration place was far from where they live compared with 14% of older respondents. This could be related to the number of youth who live far from their home of origin due to work or study. On the other hand, older voters were more likely to say that they lacked sufficient identity documents.

Knowledge and Opinions on Priority Issues for Reforms

In order to measure public knowledge and views towards priority issues for electoral reform, PACE asked respondents a number of questions about their views of the 2015 elections and their priorities moving forward.

Perceptions of the Effectiveness of Election Observers

There was a significant increase in the percentage of the public who believe that independent election observers can guarantee transparent elections since PACE asked citizens in May 2015.

There was no significant difference between socio-demographic groups on the perceived effectiveness of observers. However, if respondents already knew about election observation groups, they were more likely to consider them useful for guaranteeing transparency in elections.

Trusted Sources of an Objective Assessment of the Election Process

Levels of Satisfaction with the 2015 Elections

However, among respondents from states, there was a slightly lower level of satisfaction with the election compared to respondents from regions. Men were more likely to say they were satisfied than women.

Public Opinions about Need for Reforms in Election Process

Of those respondents who noted a need for improved election processes, PACE asked “what specifically do you think could be improved in the future?” recording up to three answers. Sixty-one percent (61%) respondents pointed to the voter list/voter registration as an area for improvement, while 37% noted election day management, and 35% said civic and voter education needed improvement. Electoral fraud and the structure and appointment of the UEC and its sub-commissions were also frequently mentioned. Although they said there was a need to improve elections, a quarter of respondents said they did not know what specifically could be improved.

Awareness and Expectations towards the Political Institutions and Newly-elected Officials

Public Understanding about the Method of Electing the President

To measure citizen knowledge of their government representatives and officials, PACE asked respondents: “Do you happen to recall the name of (a) the ward/village tract administrator; and (b) the newly elected member of Pyithu Hluttaw for this constituency?”

Less than a quarter have high-knowledge of their officials, correctly naming both their representative in the Pyithu Hluttaw and their local administrator. Male respondents have a slightly higher knowledge index than female respondents.

More people could name their MP in 2016 than people in 2014, when The Asia Foundation (TAF) asked a similar question in its national survey. The percentage of people who can name their local administrator decreased slightly since 2014. PACE believes there was a slight decrease because a number of ward and village tract administrators were recently appointed during the time the PACE survey was conducted. Men were more likely to know the name of their MP than women.

PACE asked respondents if they “are aware of any meetings/activities organized by your newly elected MPs in the past 5 months?”. Only one quarter of respondents said they had heard of activities by the MP in the last 5 months (January-May 2016). Nine percent (9%) said they participated personally.

Public Expectations about the Role of MPs

Public Opinion on Priority Issues for the New Government

PACE also asked respondents about problems faced by Myanmar as a whole that the new government should address. Most respondents said that peace and armed conflict was the top priority facing the country (41%), while education (23%) and infrastructure (18%) were also common issues.

Respondents from states and regions mentioned different priorities, with people in states giving higher priority to peace and armed conflict and infrastructure than those from regions. At the same time, respondents in regions placed higher priority on environmental impact of industries, unemployment and land issues.

Women were also less confident in key institutions, such as Union-level parliament and the UEC, and they were more likely than men to say they did not know how to answer.