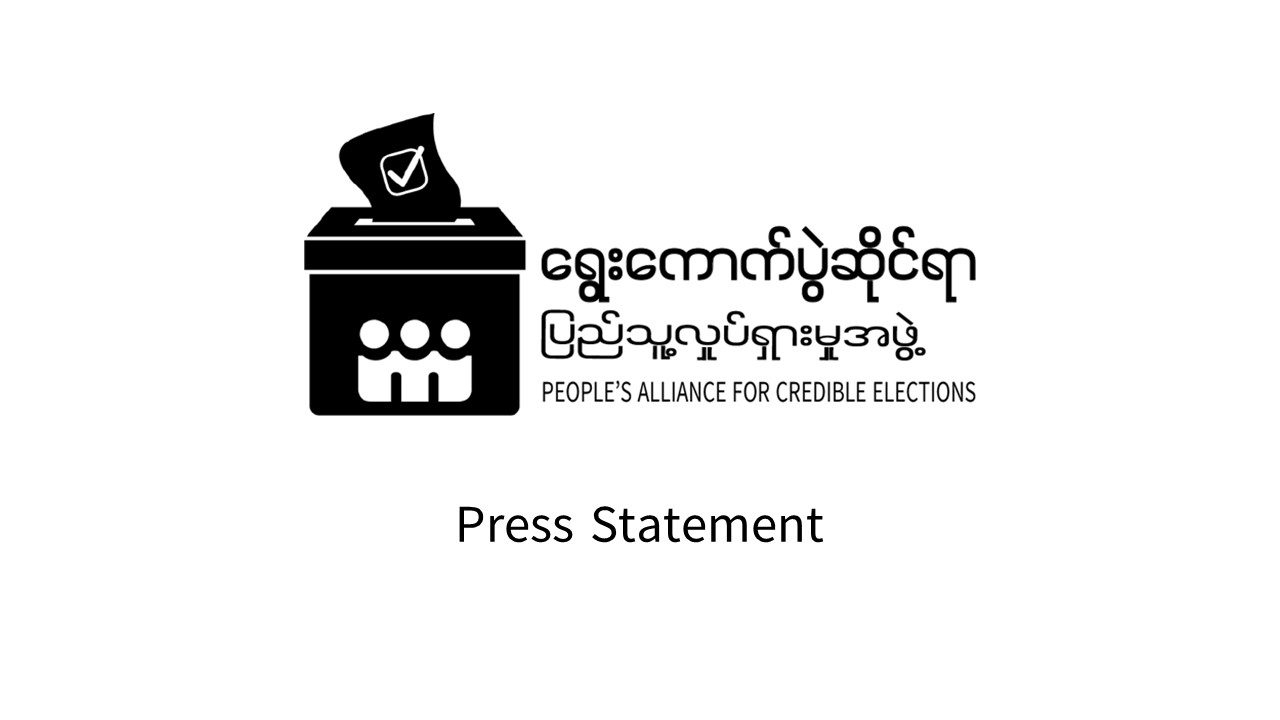 The Union Election Commission (UEC) has responded to the application of the People’s Alliance for Credible Elections (PACE) as an election observer group on July 30, 2020 that PACE is not allowed to observe in the upcoming general elections scheduled on November 8. The main reason for rejection is because PACE is still receiving international funding despite being an unregistered organization. The decision of UEC to deny this accreditation posed a huge hindrance to continuing PACE's nationwide observation mission.  Moreover, we are seriously concerned about the possible impact on the transparency and credibility of the electoral process and even post-election political stability because of the decision made by UEC to limit domestic election observation missions, which is a fundamental principle for transparency of the electoral process. Therefore, in order to promote political stability and hold 2020 General Elections successfully, we urge UEC to open the election observation to all domestic observer groups with no restriction.

In the upcoming 2020 elections, PACE’s plans were to conduct a nationwide election observation by deploying up to 2,900 observers during the election. On July 14, PACE submitted an application request and additional information requirements to UEC for accreditation on July 21.  Earlier this year, PACE requested a recommendation letter from the Union Election Commission for PACE’s registration process at the Union Registry Board under the Association Registration Law. However, UEC refused to provide the recommendation letter because the UEC perceives PACE’s activities are only monitoring the UEC’s work and observing the elections, rather than collaborating with the UEC. Moreover, PACE’s application for accreditation as an election observation was rejected because PACE is receiving international support while not being registered and UEC perceives that it is against the Association Registration Law. This is a reversal from a public statement given by a UEC representative at the UEC-CSOs Stakeholder meeting on July 17th, which emphasizes that accreditation does not require registration. Therefore, in order for PACE to register, PACE would need a recommendation letter from UEC, but UEC refuses to provide the letter. However, at the same time, PACE’s accreditation was denied on the grounds that PACE is not registered and still receiving international funding.

International election observation missions will be limited due to travel restrictions and quarantine requirements as necessary preventive measures during the Covid-19 pandemic. Therefore, to safeguard the transparency and accountability of the electoral processes, domestic election observers’ role is of crucial importance. PACE has been preparing itself to observe the whole processes of the 2020 General Elections nationwide with over 2,900 observers. However, the Commission’s decision will reduce a significant number of domestic election observers. Consequently, we are particularly concerned that such restrictions will largely affect electoral transparency and credibility of the elections. Therefore, we urge the Union Election Commission to ensure that all local CSOs can freely participate in the election observation to promote electoral stability and transparency.

The People’s Alliance for Credible Elections (PACE) is an independent, non-partisan, and non-government domestic election observer organization. PACE was founded in 2014 to strengthen democratic institutions in Myanmar through safeguarding citizen rights and promoting public participation in the electoral processes. To promote transparency, accountability and inclusiveness in the electoral process, PACE mainly works on civic education, election observation, and electoral reform. Since the initial voter registration project in 2014, PACE has observed the 2015 General Elections with 2,500 observers nationwide, the 2017 By-elections with over 700 observers and the 2018 By-elections with over 700 observers. PACE also conducted observation/monitoring in Yangon City Development Committee Election in 2019 with over 350 observers. In addition to the election observation, PACE also conducted five opinion polls and other mini surveys nationwide during the 2015-2019 period. Moreover, we also conducted a survey on the citizens’ perspectives in the pre-election period in 2020 and will publish the findings in the coming weeks.