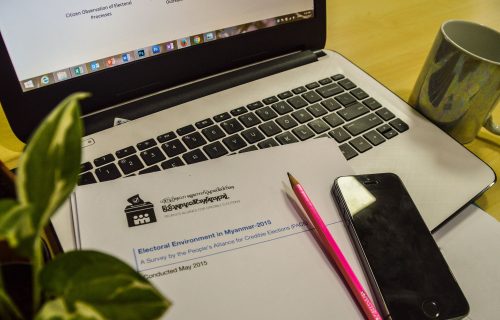 Intention to vote
PACE has asked a standard question, which have been asked widely in Myanmar polls recently: if citizens have an intention to vote in upcoming general elections. The majority of the respondent (81%) said they have planned to vote.

Non-partisan election observers are one of the most important factors to build public
confidence and contribute to the integrity of the elections. PACE have asked if they have heard that independent observer groups are observing elections, 46% said they have heard of them, and 27% said no. When it comes to the role of domestic and international observers in elections, people support domestic groups more than international groups. 53% of the respondents said domestic groups are helpful for transparency of the elections and only 45% said international groups are helpful.

Opinions mattered to decide the quality of the elections
When it comes to decide whether the elections went well, PACE was interested to know how the perception of people has been shaped. PACE has asked “Whose opinion matters to decide if elections went well” out of eight categories. The first and second most important for them is “Myanmar government” followed by “Independent observers.” 18% and 15% said Myanmar government is what matters most and 15 % and 12 % said independent observers are what matters most.

Expectation of elections
PACE’s interviewers asked the respondents if Myanmar is ready for elections, and 63% said they agreed with the statement. When PACE asked the question “2015 elections will be free and fair,” only 64% agreed. When people are asked about negative scenarios like “it will be fine if there is no election in 2015,” only 38% agreed with this.

Views on Politicians
PACE asked citizens to what extent politicians are trustworthy. PACE has asked its respondents that if politicians care about ordinary peoples’ interests, 59% said they agreed that politicians cared about them. And when we asked differently, “politicians make promises at election time but do not fulfill them afterwards,” 45% agreed with this
statement.

In a transitional country like Myanmar, for the elections to reflect the will of the people and to promise democratic changes, people need to be well informed and motivated to engage in the electoral process. PACE hopes that these findings can at least partly contribute to the work of political parties, local NGOs, the Myanmar government, like UEC, and the international community to meet the local needs and complement the findings of others.
PACE also hopes that Myanmar CSOs carry out additional surveys and other research in the future to inform civic and voter education efforts.