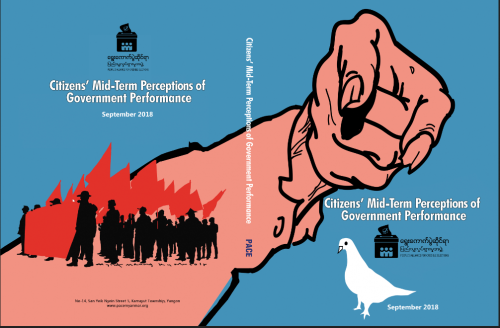 Democracy in Myanmar
More than half of citizens (57%) were not able to mention at least one characteristic of democracy. Of the characteristics identified by citizens, peace (17%) was the most mentioned.

Interest in politics, interpersonal trust and participation in civic and political activities
More than one third of citizens (38%) expressed that they are interested in politics.
There is a low level of general trust in Myanmar society. The vast majority of citizens (77%) indicated that they do not trust people
Around half of citizens reported having participated in at least one civic (55%) or political (45%) activity over the past year.

Perception of government performance
About half of citizens think that civic and political rights are better now than under the previous USDP government. However, less than half said that aspects of peace and conflict got better.

Expectations of political reform
Half of citizens consider that chief ministers in regions and states should be elected directly by citizens. However, while 27% of citizens support giving more power to region and state governments, 21% think that the balance of power between the Union and region/state governments should remain the same.
A slightly lower percentage (42%) still believes that ideally men should be more involved in politics than women, with 31% indicating that men and women should be involved equally.
About a third of citizens (35%) consider that the presence of military MPs in the Union Parliament should remain the same or increase. A similar percentage (32%) would like the military presence in the legislature reduced or eliminated.