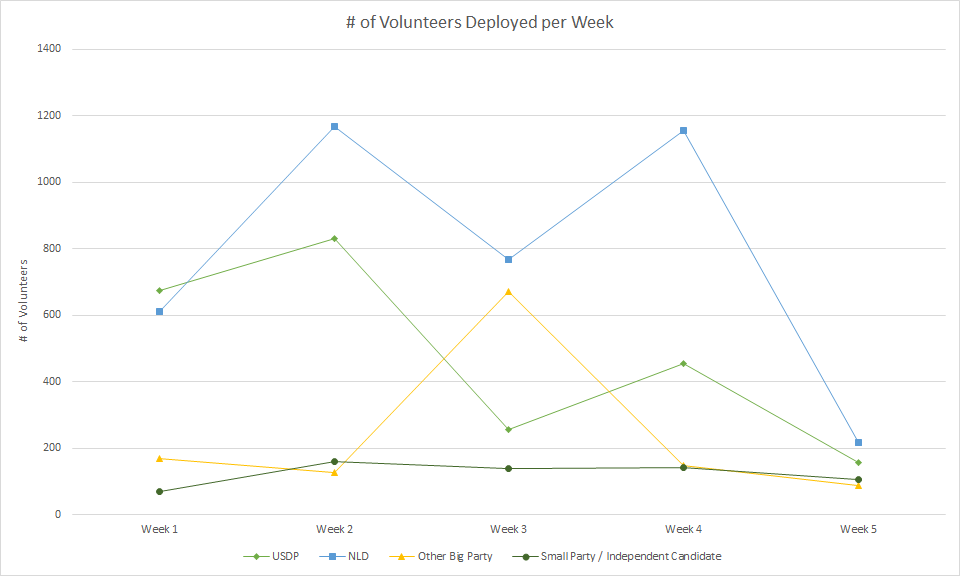 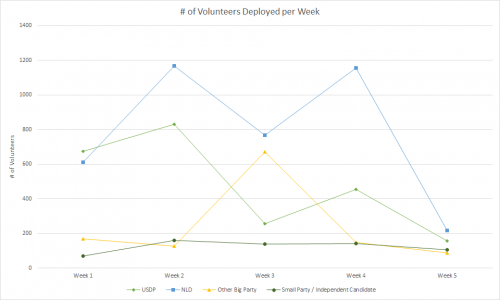 September 3, People’s Alliance for Credible Elections (PACE) and Phan Tee Eain (PTE) deployed 12 long-term observers to monitor the campaign environment in the by-election areas. Each week, the LTOs interview election officials, candidates and ordinary voters, and directly observe campaign rallies. During the first five weeks of the campaign period, PACE and PTE’s long-term observers (LTOs) observed a few cases (six) related to inciting comments against people of other ethnicities during rallies However, the observers did not find any personal or inciting comments against other candidates when they observed rallies and interviewed candidates. Sub-commission officials reported that they received four official complaints during these five weeks. The reasons of complaints were related to damaged NLD and USDP campaign materials, the NLD’s alleged use of the president and state counsellor’s image while campaigning, and one to a village head issuing inciting comments against a candidate and using official resources for the campaign.

When candidates conducted their camping activities, they mostly distributed materials (69%), conducted rallies (60%) and hung posters (46%). Of the 43 interviewed candidates, 33 said that they have appointed a campaign manager (electoral agent) for their campaign activities; only two of these campaign managers are women. Rallies were mostly held at public places such as markets, parks, etc., and at private offices or homes. There were a few rallies in religious places. Candidates conducted civic education activities specifically targeted at women in only four of the 12 observed townships.

PACE and LTE observers will continue monitoring the campaign environment until November 2.